Sushanth and Ruhani Sharma’s latest Movie Chi La Sow released last year and got good response from audience but due to lack of commercial elements and less promotion with heavy competition with Goodachari and other filsm movie not worked well at box office.

On first airing Chi La sow got disastrous 2.8 TRP Rating, which is one of lowest TRP ratings in recent time, But movie is very good heart touching story, but makers not planed well and that effected badly at box office and television. 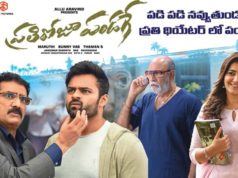